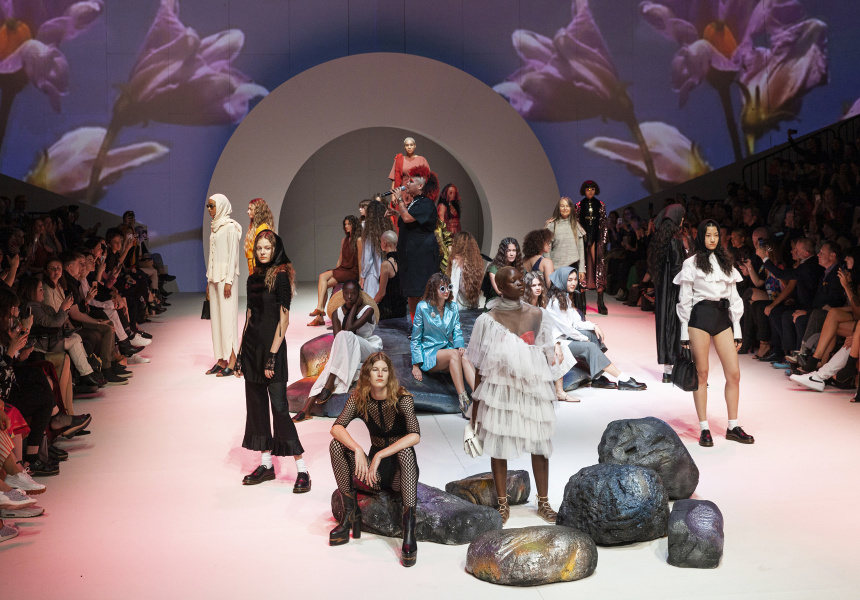 In the past decade, many aspects of the fashion industry have gone digital, including retail and publishing. But one thing that has endured IRL – and has remained crucial to how business is done – is the fashion week, which occurs in multiple cities around the world biannually.

Labels have relied on these spectacles – traditionally separated into spring/summer and fall/winter events (increasingly with resort and pre-fall collections in between) – to debut collections, while buyers and editors use them to order retail ranges and pinpoint trends. It’s become a merry-go-round of sorts: design, showcase, shop, repeat.

But when the pandemic hit earlier this year, the fashion industry – and the concept of the fashion week – radically changed.

In February, as editors and buyers gathered for Milan Fashion Week, the coronavirus was peaking in Wuhan. At Paris Fashion Week later that month, audience numbers dwindled, a number of labels withdrew collections or cancelled shows, and face masks were the trending accessory. By mid-March, as Melbourne Fashion Festival was drawing to a close, local coronavirus cases were growing and the festival was cut short.

The closure of retail stores and cancellation of wholesale orders that followed left many local designers with empty shops and warehouses full of stock. In those first few weeks, Richard Poulson – co-founder of Australian fashion label Morrison and CEO of new shopping platform Showroom-X – teamed up with the Australian Fashion Council to launch We Wear Australian, a campaign to draw attention to brands impacted by the pandemic. During the three-week campaign, local designers offered special deals and discounts to drive traffic to their websites.

Along with the lockdown that led to the closure of bricks-and-mortar, the industry was forced to adapt to social-distancing restrictions and travel bans. It was only in January this year – before the pandemic had spread across the globe – that Vogue Italia opted for an entirely illustrated issue to demonstrate the environmental impact of photoshoots. Who knew just months later most of those trappings – air travel; generators for electricity in remote, glamorous locales; catering for teams of stylists, photographers and models – would be impossible anyway due to a pandemic?

While many cultural events around the world were cancelled, some, including international film festivals (such as MIFF); Tomorrowland; and Melbourne Food & Wine Festival headed online. The fashion industry followed suit.

In June, London Fashion Week was the first of the four fashion capitals to replace physical shows with online programming. Consumers could explore virtual galleries (along with short films, podcasts and playlists), with participation from some of the world’s most esteemed labels, including Burberry and Victoria Beckham. Other designers, including Yves Saint Laurent, Dries Van Noten and Michael Kors, decided to delay presentation until later in the year.

Finnish design house Marimekko presented its pre-spring ’21 collection digitally at Copenhagen Fashion Week in August. “[It] offers the perfect opportunity to launch Marimekko’s 70th anniversary-year celebrations together with our community,” president and CEO Tiina Alahuhta-Kasko said in a statement. “In these unprecedented times, it is important to find new ways to inspire consumers as well as industry professionals, and we are happy to take part in one of the forerunning international fashion events in the world.” The digital presentation was set in the brand’s textile-printing factory in Helsinki, where more than one million metres of fabric are printed every year.

Since the pandemic began, many local labels – including Arnsdorf, E Nolan, Obus, White Story, Kloke and The Social Studio – have added face masks to their ranges. Others are using the downtime to make more permanent changes to how they do business.

Sydney-based jewellery designer and sculptor Holly Ryan says she’s used this period to rethink the hyper-seasonal approach to design. (She also opened a new studio and workshop in Sydney.) “That means moving away from a fast-paced fashion calendar and trend cycle to focus instead on a seasonless model,” she tells Broadsheet. “We’ll release new pieces only when they’re ready, and will continue to offer pre-order on more bespoke items, so that we can keep waste to a minimum.”

Aje co-founder Adrian Norris has used the break to ensure the brand’s digital presence is up to scratch. “In May, we [relaunched] our e-commerce platform. [And] in July, we opened a new flagship location in Sydney’s Bondi Junction. Bricks-and-mortar remains an anchor of the Aje personal experience,” he says. The label also opened a store in Parramatta in November.

Not following the seasons

Sisters Cheryl, Vanessa and Gabrielle Manning – founders of Sydney-based womenswear label Manning Cartell – hope their shift towards a seasonless model will be part of a broader trend in the industry.

“Saying ‘no to the fashion calendar’ means that we are able to present you with inspiring pieces that are relevant to the world’s weather patterns. Pieces that you will want to wear,” they said in a statement on Instagram. “At Manning Cartell we have always focused on an ethical approach to doing business, it’s part of our DNA. So now, to build on our ethical foundation, to reduce waste and the speed of fashion, and to make what we present to you more relevant, we will no longer be following the fashion calendar.”

The pandemic forced a reckoning for Melbourne-based womenswear label Kuwaii, which was also caught up in the production grind, with runs slowly increasing every season. The team returned to a smaller, less wasteful production process, incorporating the use of dead-stock fabrics and its own remnant fabrics.

For emerging labels that don’t yet have brand recognition, there are added challenges. Liandra Gaykamangu is a Yolngu woman from north-east Arnhem Land and the founder of swimwear label Liandra Swim, which was set to showcase at this year’s Mercedes-Benz Fashion Week Australia. The label was also nominated in two categories at the inaugural National Indigenous Fashion Awards, announced on August 5.

“The cancellation of Fashion Week was very disappointing,” Gaykamangu says. “We’re a small label, so it was very exciting when there was an opportunity for Liandra Swim to be a part of such an iconic Australian fashion event.”

Although Covid-19 has caused shipping delays, it’s added depth to the label’s commitment to slow fashion. “Liandra Swim only ever creates a limited number of pieces for any one collection. We aren’t looking to oversaturate the market, and when we sell out, we don’t restock either,” she says. “Instead of your package arriving in three days it’s now taking up to 10 days to arrive. I think the wider community is growing a deeper appreciation on how clothes are actually made and what issues designers are facing.”

French-Australian couture designer Delphine Genin has responded to the pandemic creatively, launching a series of couture embroidery classes online. She studied at the prestigious, Chanel-owned embroidery school Ecole Lesage in Paris, where she mastered the intricate Luneville style (she’s said to be the only designer in Australia to specialise in this particular style). The classes include access to 60 minutes of easy step-by-step videos; 25 hours of individual embroidery work; and a starter kit that includes a technical drawing, printed silk organza, silk and metallic threads, Swarovski crystals and a full embroidery set to complete your design.

But despite the fashion industry’s scaled-back production and embrace of digital business models, the pandemic has proved the final nail in the coffin for many businesses already suffering from mismanagement and financial pressures.

This week, after 17 years, Aussie designer Alice McCall, founder of the eponymous label, appointed administrators. “I have had to make a necessary decision to edit down my business, with the objective of building a more sustainable business model for the future,” she said in a statement.

A couple of weeks ago she told Broadsheet that the pandemic had forced the industry to leverage digital opportunities and tools in order to grow. “I’m focusing on [growing] the consumer database and digital revenue, whether it be through social media, digital-marketing content or the e-commerce platform.” In June, she also offered an exclusive digital pre-order for her resort ’21 collection, and this week launched a collaboration with Cotton On.

And it’s not just designers having an impact on the industry. With Australia’s second-largest airline, Virgin Australia, going into voluntary administration, it has had flow-on effects, leaving Melbourne Fashion Festival without an official sponsor.

So, will the traditional fashion week still have a place in a post-pandemic world? Paris, New York, London and Milan all resumed physical shows for the spring/summer ’21 season in September, with the majority of audiences watching via livestream. And Australian Fashion Week is set to return for its 25th year in June 2021, with Afterpay sponsoring the event for the first time. The new sponsor has waived fees for participating designers, in a nod to the challenges they’ve faced this year, and the shows will be more consumer-friendly, with tickets available for several select shows and consumer events each night.

For Australian designers and consumers, the flow-on effects of the pandemic (travel bans, local and international lockdowns, and shipping delays) have been a reminder of the importance of being able to manufacture goods locally.

In January, Roy Morgan research found 88 per cent of Australians were more likely to buy products made in Australia. Since the pandemic, more than half of Australians (52 per cent) say they now have an even higher preference for Australian-made products. Monthly applications for the Australian Made logo have increased by 400 per cent since January. Jasmine & Will’s leisurewear range, released in July, is just one collection bearing the logo.

“Our biggest barrier for producing locally is the exorbitant cost to do it. And unfortunately, with sleepwear, there is a barrier to how much people are willing to pay. The cost for us here is about five times the cost of producing overseas. So, to pass that on to the consumer is pretty difficult, which means we eat at our own margin – but it’s something I’ve always wanted to do,” founder Jasmine Lindsay told Broadsheet in September.

In a recent survey by Australia Post 30 per cent of respondents said they’re making an effort to buy more Australian-made products than they did previously, while 23 per cent of shoppers said they’re more conscious about buying from businesses in their local areas.

The We Wear Australian campaign generated $3 million in revenue for the 140 participating brands. Other similar initiatives have also been established during this time, including Click for Vic, Buy from the Bush (launched as a result of the devastating effects of the bushfires) and Empty Esky (an initiative for Victoria’s regional hospitality industry).

“I hope it has brought about more local awareness for the consumer, and that they will invest in homegrown brands and companies first and foremost,” Aje’s Norris says.