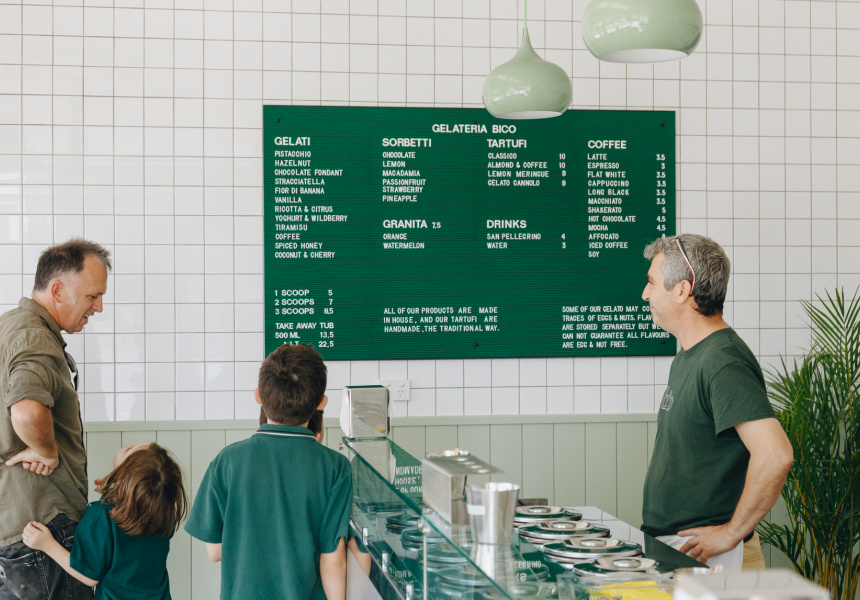 Tartufo is a traditional, spherical ice-cream dessert that originated in the small seaside town of Pizzo in southern Italy. Pizzo is a 30-minute drive from Acquaro, the hometown of Gelateria Bico co-owner Domenico Gaglioti.

“Whenever we go back to Italy, we like to go to Pizzo just to indulge in a tartufo,” says Gaglioti’s son Davide, who co-owns the shop with his father. “We just wanted to try and recreate that and bring it to Melbourne.”

At Gelateria Bico, which is named after Domenico’s grandfather, the classicotartufo is made by scooping a half-sphere of hazelnut gelato, making a hole in the middle and squeezing homemade chocolate sauce inside. A second half-sphere of chocolate gelato is slapped on top and the tartufo is then moulded together by hand. Then, it’s blast-frozen for 20 to 30 minutes and dusted with cocoa powder. There’s an amaro and white chocolate variety too.

Domenico and Davide are graduates of an intensive artisanal gelato-making course at Carpigiani Gelato University near Bologna, Italy. “My family is all about tradition,” Davide says. “There was just something about gelato that just appealed to me the most. I think it was just the whole process behind it and … doing things the artisanal way.”

At Bico, gelati is prepared from scratch and churned daily. Davide and his father are having fun experimenting with rotating specials including Nutella cheesecake, liquorice and chocolate, salty Snickers, Franjaffico (choc-orange gelato and Frangelico liqueur-soaked sponge), cantaloupe granita, and a prickly-pear sorbet. The fior di banana is a staple and a standout, with each batch made from 15 to 20 ripe bananas. There’s also gelato-filled cannoli and lemon meringue tarts.

The fit-out was designed by Steelotto, and the Gagliotis assembled 80 per cent of it themselves. “We’re a lot prouder of the finished product,” Davide says. “And it just meant a lot more to us.”

“It stores the gelato better [than typical display cabinets], it retains a consistent temperature and the gelato isn’t affected by light or air or anything like that,” Davide explains. “There is the disadvantage that you can’t see the product – your eye can’t catch which flavour you want. [But] I hope my gelato tastes good enough that [you don’t need to].”